It was a great honor to sit down with the very talented DP Adam Kimmel. His career has spanned almost 30 years, starting out as a teenager being an apprentice for Cinematographer Michael Chapman. 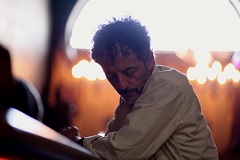 Matthew Toffolo: One of your first jobs was as a Camera Apprentice on the film “RAGING BULL”. How was were your experiences working on the iconic film? Were you like a sponge at the time, taking in everything around you?

Adam Kimmel: I was 18 when I trained on Raging Bull and it was my second film in that capacity so my experience and perspective were still pretty limited. So yes, of course I knew the work of both Martin Scorsese and Robert Deniro at that point…